When she wasn’t brushing tears, Jorie Ftorek was gripping that steering wheel like a 9-iron.

“I knew the work they did here,” the former pro golfer said during a 2017 interview with the paper. “I knew Betty. That’s why I was going to Morgantown.”

Ftorek was talking about Betty Puskar, the benefactor and medical advocate who helped drive breast cancer research and treatment straight down the middle of the fairway in the University City.

Puskar, 80, died Sunday at her home in Morgantown after months of declining health. Her death is not related to COVID-19.

For 35 years, she had put her health — her empathy and altruism, too — out there for all women and all of West Virginia to see.

On Halloween, 1985, she found herself in the middle of her own horror movie.

By chance, she discovered a lump.

The doctor wasn’t smiling when he came in with the X-rays and the charts and the diagnosis that changed everything.

Other doctors, and more tests, followed.

They gave her a year to live. Maybe three, if she was lucky. They said it without irony.

Texas (deep in the heart)

Her then-husband was a business magnate whose Mylan Pharmaceuticals generic drug company put Morgantown in the arena of international commerce.

Milan “Mike” Puskar bought his wife an airplane ticket to Texas and the M.D. Anderson Cancer Center in Houston, then one of the top treatment facilities in the country for the dread disease.

Between the ravages of that disease, and the rigors of the aggressive, experimental treatment employed by the doctors there, Betty Puskar almost didn’t make it.

She was bald and gaunt from the chemo.

She was weak and nauseated.

And, very much afraid (which no one ever knew).

When her chemotherapy wig got too hot and scratchy, she’d scoop it from her head, and plop it in her lap, all in one smooth move — never mind the social setting.

Puskar was lucky, though, despite the diagnosis.

That’s why, whenever she reminded herself of that, the klieg light-wattage of her smile would dim, a bit.

Puskar eventually became too weak for her chemo-commutes to Texas.

She was bedridden for months in Morgantown.

So, Houston came to her.

A chartered plane from M.D. Anderson flew the chemotherapy drugs to Hart Field, a bit of alchemy by air and affluence, which really set her to thinking.

Yes, she was very ill, she said.

Yes, she was likely dying, she said.

But so were a lot of other women in West Virginia, as breast cancer does conduct a terrible roll call here.

And how many of those women, she wondered, her fellow clinical-sojourners, could even begin to afford this stuff?
How many could afford the experimental treatments in Texas and the plane rides for appointments, not to mention the additional air deliveries of the medications that (barely) were helping her maintain?

The daughter of Garnett and Gladys Howard was pretty sure she knew the answer.

A surprise for senior year

Betty and her six brothers and sisters grew up in a house without running water in rural Virginia.

Snake Run was the name of wooded, hilly enclave near Covington, the nearest “big” town over and just 20 minutes or so from West Virginia, and White Sulphur Springs, where Mike Puskar was setting up the first incarnation of his company in a condemned roller rink.

Covington had a drug store with a lunch counter and Betty was working there as a waitress. He dropped by for a meal and was smitten.

She didn’t romanticize her upbringing and she didn’t run away from it, either.

The waitressing job was putting her through business school. Her resume also included hairdressing and secretarial work.

“Work,” was the watch-word in the Howard house.

If it’s broken, Garnett told his kids, you’d better learn how to repair it.

If it’s something extra you want, like that pretty necklace, or that BB gun or that nifty Zenith transistor radio, then you’d better get a job.

That didn’t mean that Dad wasn’t a softie, however — and that’s why she would still blink tears when she remembered the class ring.

It was her senior year at Dunlap High School, and she confided to her mother that she really wanted a ring.
She knew that probably wouldn’t be able to happen, however, she admitted.

One morning, though, as graduation drew near, she walked in the kitchen to spy a total of 28 $1 bills carefully fanned out on the table for her.
That was the cost of the ring, and it was $3 over her dad’s take-home pay. 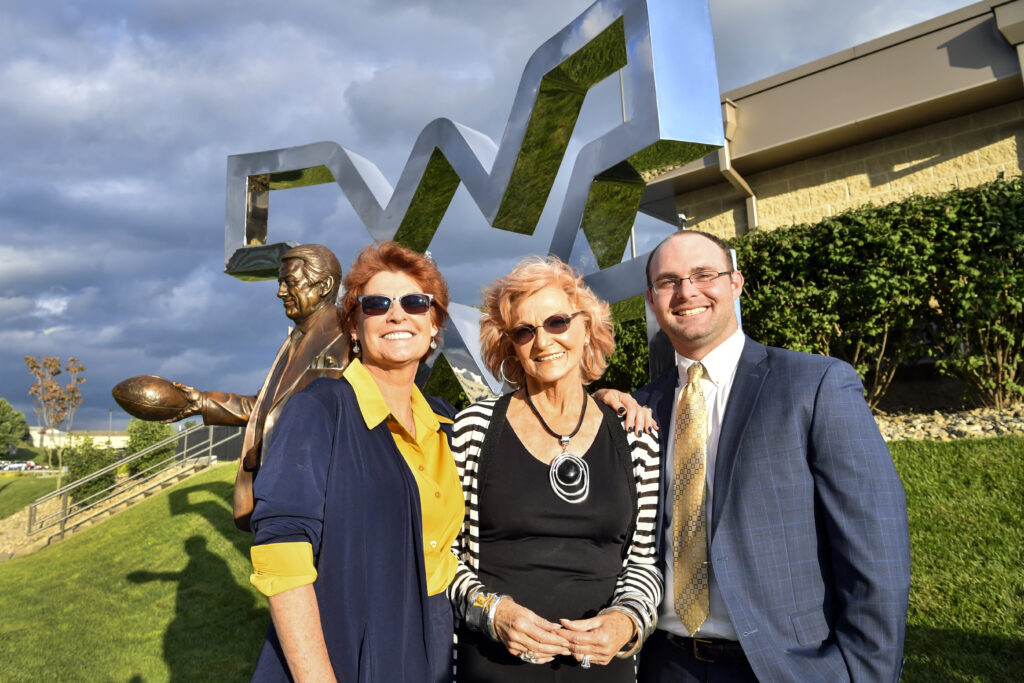 The late Betty Puskar with her daughter and grandson. (Submitted)

One room at a time

When she was diagnosed, there were no standalone cancer treatment clinics in West Virginia — not even in Morgantown.

That would change in 1990 when WVU’s Mary Babb Randolph Cancer Center began seeing patients in Evansdale.

Betty served on the board, and it was a donation from her, plus all kinds of other outreach, besides, that led to the establishment of the clinic within the center that the university would christen the Betty Puskar Breast Care Center.

It was easy, she said.

She already had it built before the first shovel turned the earth.

When she’d be particularly sick from the chemo, and on the days when it just plain hurt too much to even move, she’d still put her brain to work.

Her imagination did all the heavy lifting.

She conjured a clinic, and she mentally placed it in Morgantown.

A place where her Mountaineer sisters would have the same access to care that she, with all her resources, had.
See ya, Texas.

“I built the cancer center in my mind,” she said in a past interview with the paper.

“When I felt down and depressed, I’d add another room. I thought, ‘Now I know what I want to do and what I’m going to do.’ ”

She would employ graciousness, which people expected, and humor, which was a delightful surprise.

“Talk to my breast,” she once famously told former WVU football coach Don Nehlen during a video shoot for a charity event.

She was referring to the location of her clip-on microphone, as the gentlemanly coach blushed and broke up laughing at the same time.

Puskar kept her phone number public and did her own grocery shopping, naturally gravitating to the longest checkout lane, marveled her grandson, Kyle Pratt.

That was so she could talk to people, and hear their cancer stories, he said.

His grandmother, he said, smiling at the memory, even had the distinction of being banished from Disney World.

Something about airborne dinner rolls in a restaurant, and a chuckling British couple, a few tables over.

“She was politely asked to leave for a day.”

Teeing off in the snow

All Disney indiscretions aside, Puskar was also the face of the Betty Puskar Golf Classic, which for 17 years was a Ladies Professional Golf Association tour stop at The Pines Country Club.

That’s how Betty, who could also handle herself on the links, got to know Jorie Ftorek.

Golfers in town for the tournament always got walk-throughs at the breast care center, where they learned about mammograms and how to properly do self-exams.

It was the week of Thanksgiving in 1996 when Ftorek found her lump.

The Boston area native by then was in the process of retiring from the LPGA tour.

Months before, she had taken a job as a teaching pro at a course in Binghampton, N.Y.

She got in her car and drove six hours straight to Morgantown, snow squalls and uncertainty the whole way.

Puskar was waiting on her and wrapped her in a hug.

“You’re gonna be OK, honey,” she said, in her not-quite Tidewater accent. “You’re in the right place.”

Sadly, for Betty, Ftorek died two years ago, of a sudden heart attack.

For 22 years, the golfer motored to Morgantown faithfully, keeping her appointments at the breast care center that bore her friend’s name.

“She’s the woman who saved by life,” Ftorek once said in a video tribute to Puskar.

If compassion were golf, she said, Betty would hit the green on two — every time.